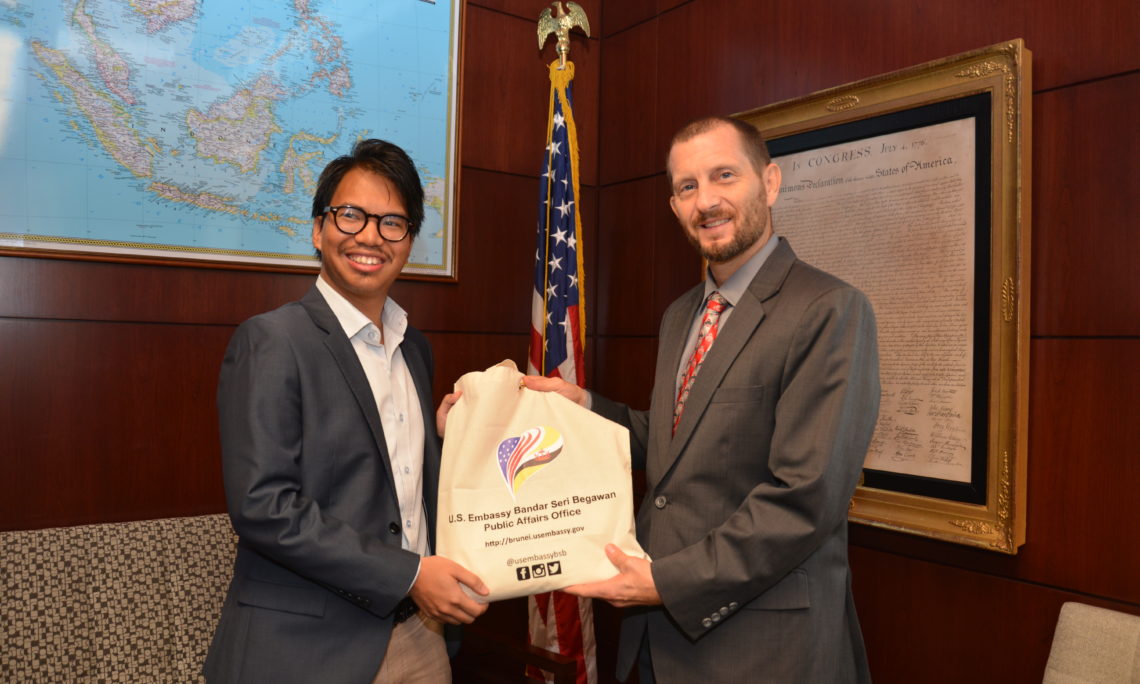 The Embassy of the United States of America in Bandar Seri Begawan is pleased to announce that the 2018 Fulbright Foreign Student Program recipient is Awangku Muhammad Aizat Pengiran Yasmin. Ak. Aizat will begin a two-year graduate study program at Southern Illinois University – Carbondale in Illinois in August.

Chargé d’Affaires Scott E. Woodard, recently met with Ak Aizat to congratulate him on his award. “The Fulbright program is our most prestigious educational exchange program, giving Bruneians the opportunity to realize their academic aspirations at some of America’s finest schools. Ak Aizat is a great addition to our group of Bruneian Fulbrighters who represent a wonderful mix of professionals that have gone on to contribute to Brunei’s development.”

On receiving the award, Ak Aizat said “The Fulbright program is a once in a lifetime opportunity. I hope to gain beneficial knowledge from Southern Illinois University, experience life in Middle America and most importantly, this is an opening for me to advance confidently in the right direction, to continue striving and pursue meaningful work.”

The Fulbright Program is the flagship international educational exchange program sponsored by the U.S. Government designed to increase mutual understanding between the people of the United States and the people of other countries.  The Fulbright Program was established in 1946 under legislation introduced by the late Senator J. William Fulbright of Arkansas, and is administered by the Department of State and the Institute of International Education (IIE).

Now it’s in 70th year, the program has provided more than 370,000 participants with the opportunity to exchange ideas and observe each other’s cultures and political and economic institutions Around the globe, Fulbright alumni include 33 current or former heads of state or government, 54 Nobel Laureates, 82 Pulitzer Prize winners, 29 MacArthur Foundation Fellows, 16 Presidential Medal of Freedom recipients, and thousands of leaders across the private, public, and nonprofit sectors.  In 1986, one of the earliest Bruneian to participate in the Fulbright Program was The Honorable Pehin Orang Kaya Seri Utama Dato Seri Setia Hj Yahya Begawan Mudim Dato Paduka Hj Bakar.

Click here to learn more about the Fulbright Program in Brunei.