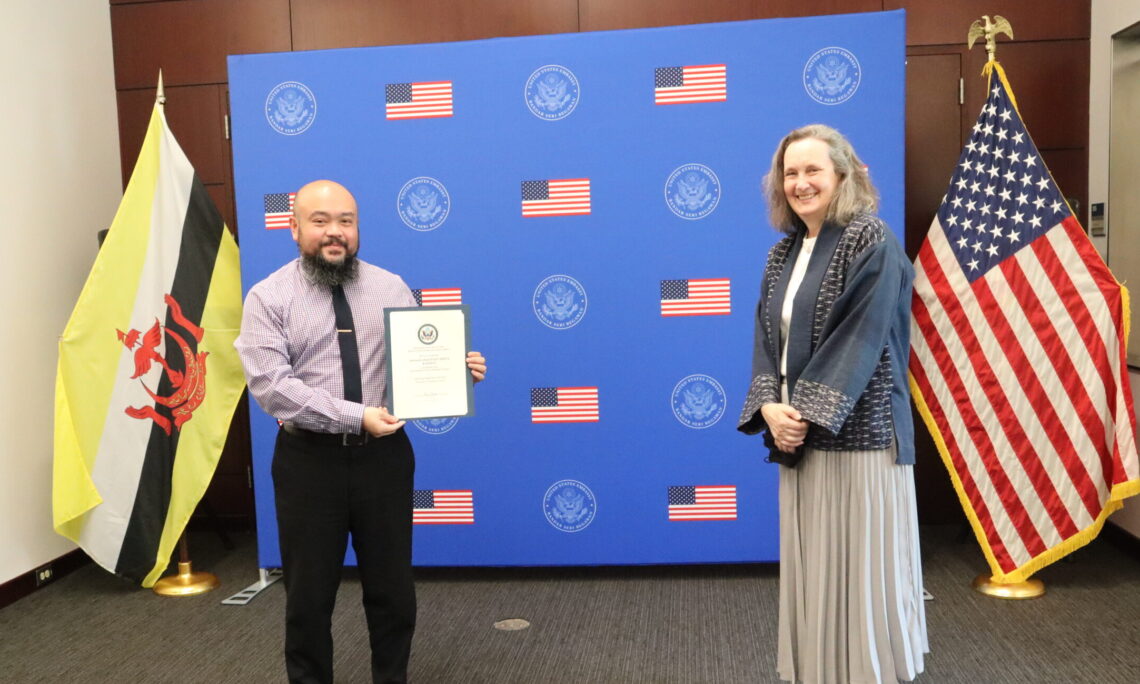 The Embassy of the United States of America is pleased to announce that Aminudin Zaki Dato Abdul Rahman, Deputy Senior Counsel and Deputy Public Prosecutor at the Attorney General’s Chambers, has successfully completed an International Visitor Leadership Program on combating trafficking in persons.

Zaki was one of 29 law enforcement officers from across the globe to participate in the program, which took place virtually from February 3 to February 25. Over the course of three weeks, participants examined best practices in combating trafficking in persons, focusing on both slave labor and sex trafficking. Activities included reviewing U.S. legislation, visa regulations, and enforcement against and prosecution of traffickers; exploring initiatives to identify, protect, assist, and provide services for trafficking victims; efforts to raise awareness through the media; and local, national, and international cooperative efforts to combat trafficking in persons. Participants also discussed strategies to end trafficking, both domestically and internationally, with local, state, and federal government agencies, law enforcement officials, educators, NGO leaders, and advocacy groups.

“I have learned a lot and hope to continue to share improvements and lessons learned that we can implement here in Brunei,” said Zaki. “The most important takeaway from the IVLP has been the importance of continuous cooperation and collaboration between all relevant agencies in combating TIP, from law enforcement agencies and the prosecution to NGOs and other agencies that can help victims during the legal process. The IVLP has also provided me with excellent networking and contact points to stay in touch and be able to continuously stay updated on developments and training opportunities.”

Following completion of the program, Zaki met with U.S. Ambassador-designate to Brunei Darussalam Caryn McClelland to discuss lessons learned from the program and explore how Brunei can work together with the United States to combat the shared concern of human trafficking. During the meeting, Ambassador-designate McClelland also presented a certificate of completion to Zaki.

“The United States is deeply committed to combating human trafficking and is keen to collaborate with Brunei to ensure that traffickers are caught and prosecuted to the fullest extent of the law,” said Ambassador-designate McClelland. “International cooperation is fundamental to cracking down on human trafficking since the traffickers themselves operate across multiple borders.”

Brunei has remained on the Tier 2 Watch List on the U.S. Department of State’s Trafficking in Persons report for three consecutive years. This means the Government of Brunei does not fully meet the minimum standards of the Trafficking Victims Protection Act and must demonstrate a serious and sustained effort to combat human trafficking to avoid an automatic downgrade to Tier 3.

The International Visitor Leadership Program is the U.S. Department of State’s premier professional exchange program, connecting current and emerging foreign leaders with their American counterparts through short-term programs to build mutual understanding on a wide range of issues. Nearly 200,000 distinguished individuals have participated in the program, including more than 335 current or former chiefs of state or heads of government, and thousands of leaders from the public and private sectors.