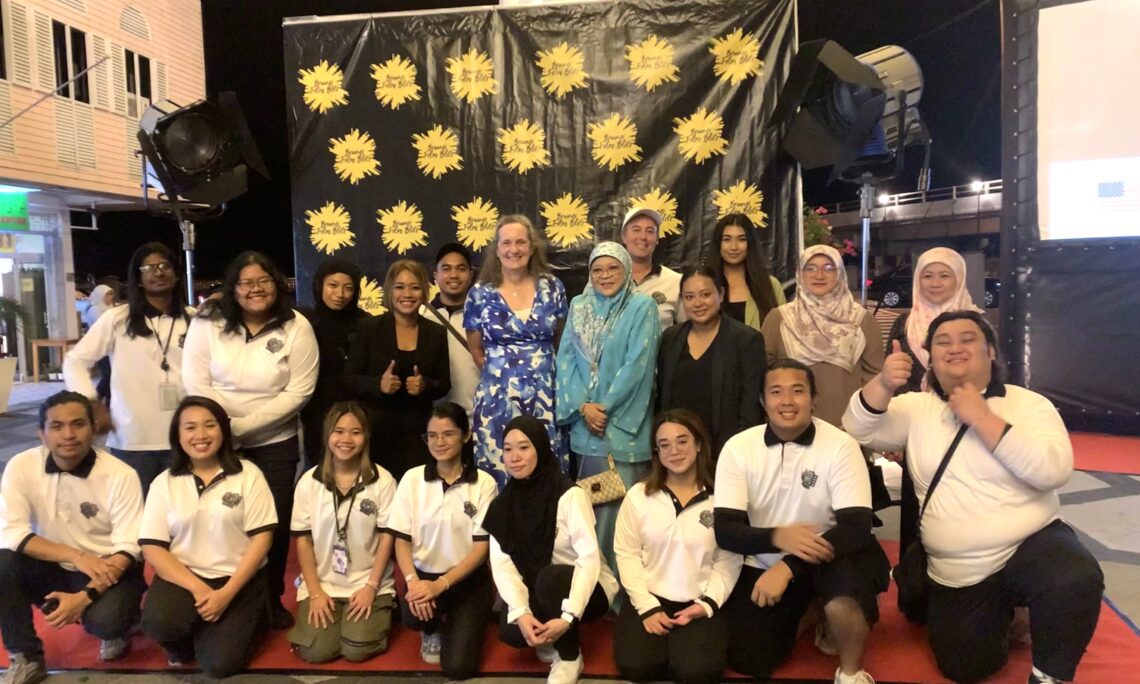 Ambassador McClelland poses for a group photo with participants of the Mengupas Cerita documentary making project, which is funded by the U.S. Embassy Small Grants Program.

The Opening Night was attended by the U.S Ambassador to Brunei Darussalam, Ambassador Caryn R. McClelland and Deputy Permanent Secretary at the Ministry of Culture, Youth and Sports, Dr.Siti Norkhalbi Haji Wahsalfelah.

At the opening speech, Festival Director Siti Kamaluddin shares that “the incorporation of Wayang Pacak means the Blitz movie screenings will go beyond the standard indoor cinema experience. Of course we are taking weather precautions but there is something special about watching films outside in fresh air, under the stars with the accompanying jungle night sounds.”

The inaugural Wayang Pacak screening will feature five documentaries about Brunei. These five documentaries are part of the Mengupas Cerita Documentary Film Initiative, a local program that represents the first concerted effort to promote the production of non-fiction films in Brunei and provides local filmmakers with the opportunity to share their researched and ethically sound perspectives with the global community.

Mahakarya Institute of the Arts Asia is the facilitating organization of this initiative and funding is provided by the Small Grants Program from the U.S. Embassy in Brunei Darussalam. According to Ambassador Caryn R. McClelland, “Film is important – not just as a vehicle for examining society and sharing viewpoints, but also as a means of reflecting Brunei’s rich culture and diversifying its economy. That is one reason why the U.S Embassy continues to support film and other creative arts that allow Bruneians to tell their own stories in their own ways.”

The Brunei Film Blitz will continue with its International Screenings from the 15th December – 28th December 2022.