The United States and Brunei Darussalam can boast a relationship that dates back to April 6, 1845 when American warship, the U.S.S. Constitution, dropped anchor in the Brunei Bay.  The historical visit resulted in the two countries eventually forming a Treaty of Peace, Friendship, Commerce and Navigation that has been active since 1850.  The United States briefly maintained a consulate in Brunei from 1865 until 1867.

On November 29, 1994 a memorandum of understanding (MOU) on military defense cooperation was signed between Brunei and the United States.  This agreement resulted in joint exercises, training programs and other forms of military cooperation between the two nations, which is still practiced today.

In December 2002, His Majesty the Sultan and Yang Di-Pertuan of Brunei Darussalam made his first state visit to the United States and met with former President George W. Bush which further strengthened relations between the two nations.  During the official visit, the Trade and Investment Framework Agreement (TIFA) was signed demonstrating the United States’ commitment to develop and promote trade and investment in ASEAN countries. 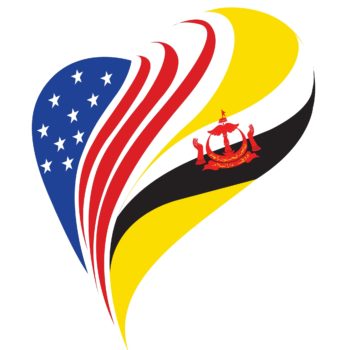 During the same year, former Secretary of State Colin Powell made an official visit to the Sultanate to attend a meeting with members of ASEAN (Association of Southeast Asian Nations) at the ASEAN Regional Forum (ARF).

In September 2012, Secretary of State Hillary Clinton embarked on a six-nation tour of the Asia-Pacific to promote U.S.-ASEAN cooperation.  During her visit to Brunei, the Secretary launched the U.S.-Brunei English Language Enrichment Project for ASEAN, dined with the Royal Family at the Royal Palace Istana Nurul Iman, and held bilateral meetings with the Minister of Foreign Affairs and Trade, His Royal Highness Prince Mohamed.

In March 2013, President Barack Obama welcomed His Majesty the Sultan of Brunei Darussalam to the White House during an official visit to Washington D.C. where both leaders expressed their countries’ commitment to fostering a peaceful and prosperous Asia-Pacific region.  During the visit, His Majesty also met with Secretary of State John Kerry and Secretary of Defense Chuck Hagel to discuss further matters regarding bilateral partnerships.

The United States and Brunei Darussalam are both members of the Trans-Pacific Partnership (TPP) which provides further opportunity for the two nations to cooperate in achieving economically sustainable and beneficial trade agreements for the region.