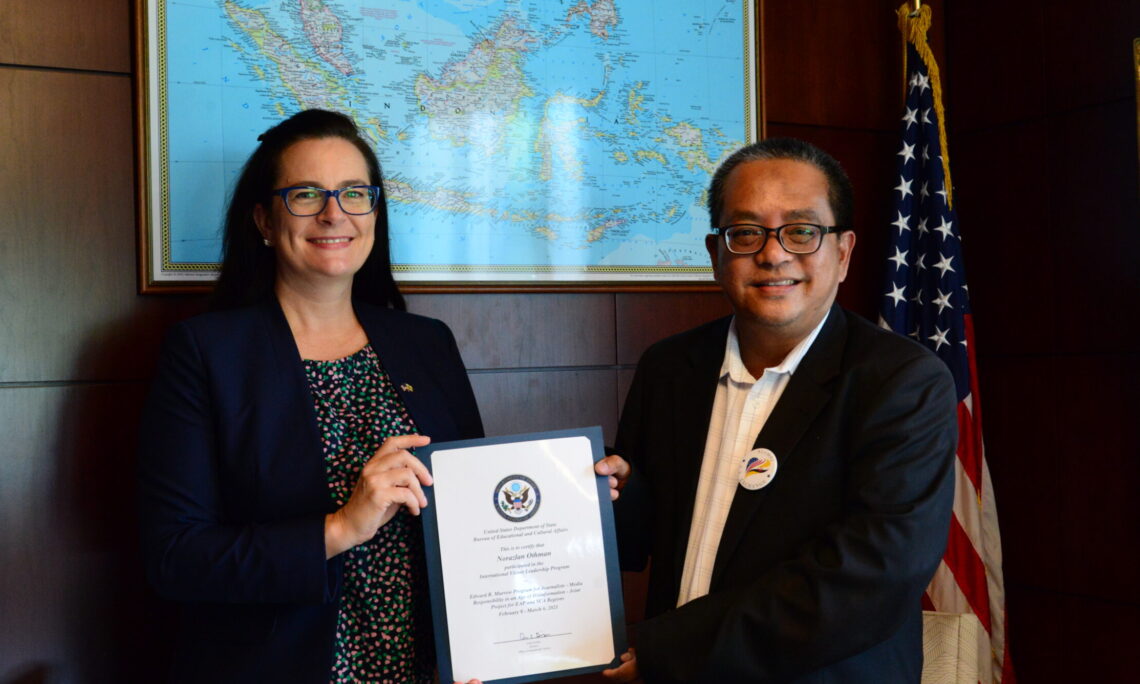 The Embassy of the United States of America is pleased to announce that Norazlan Othman, a journalist with the Borneo Bulletin, has successfully completed a 2020 International Visitor Leadership Program (IVLP), the U.S. Department of State’s premier professional exchange program. Othman was one of 10 journalists across East-Asia Pacific and South Central Asia regions to participate in this IVLP, which was titled “Edward R. Murrow Program for Journalists – Media Responsibility in the Age of Disinformation.”

Emily Fleckner, Chargé d’Affaires of the U.S. Embassy, presented Othman with his certificate of completion today. “I was pleased to hear how much Norazlan took away from this program despite the challenges of conducting it virtually during a pandemic,” said Chargé d’Affaires Fleckner. “Learning how to better recognize and combat disinformation will not only benefit him professionally but also his colleagues, since I understand he is an influential mentor within his newsroom. That is a key priority for the United States here in Brunei and around the world: promoting responsible journalism by sharing best practices.”

This IVLP took place from February 8 to March 6, 2021, via the Zoom platform. The program exposed participants to current trends and technologies in detecting and combatting disinformation and deceptive news. It highlighted the importance of investigative journalism, fact-checking, myth-busting in countering misleading information, and demonstrating the serious impact of disinformation campaigns on domestic publics. Participants examined strategies designed to encourage greater public awareness of the phenomenon of disinformation. They explored the role of government agencies, NGOs, academia, and traditional and social media outlets in the fight against the proliferation of deceptive media and the dissemination of disinformation. Participants also examined strategies that support responsible and ethical reporting in an increasingly complex information environment.

“It was an amazing, lifetime experience talking with experienced journalists from the Asia-Pacific and the United States in so many time zones, all at one time,” said Othman. “We made the best use of this experience to learn best practices, listen to their success stories, and to have intellectual discussions on topics like disinformation, misinformation, artificial intelligence. and so on.”

The IVLP provides an opportunity to strengthen relationships between international participants and their American counterparts. It is one of the U.S. Department of State’s most important exchange programs, connecting current and emerging foreign leaders with the American people through short-term programs to build mutual understanding on a wide range of issues. Nearly 200,000 distinguished individuals have participated in the program, including more than 335 current or former Chiefs of State or Heads of Government, and thousands of leaders from the public and private sectors.

More information on the IVLP can be found at the following link: https://eca.state.gov/ivlp