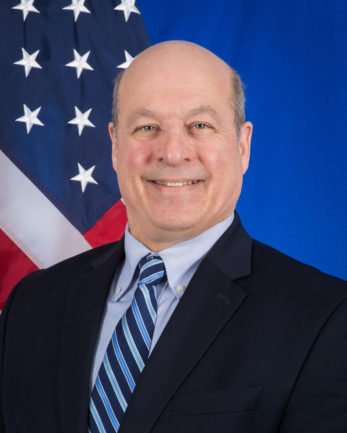 Matthew J. Matthews was sworn in as the U.S. Ambassador to Brunei Darussalam on March 29, 2019. Matt was most recently U.S. Ambassador for APEC and concurrently the Deputy Assistant Secretary for Australia, New Zealand and the Pacific Islands from June 2015 to March 2019. From 2013 to 2015, he served as the Foreign Policy Advisor to Admiral Locklear, Commander of the U.S. Pacific Command, and as the Deputy Principal Officer at the U.S. Consulate General in Hong Kong from 2010 to 2013. Matt focused on multilateral trade agreements as the Counselor for Economic Affairs at the U.S. Embassy in Kuala Lumpur, Malaysia (2007-10), and at the U.S. Embassy in Canberra, Australia (2004-07). His earlier postings include two tours in Beijing, two tours in Taipei, Islamabad, Hong Kong, and Washington, DC. He speaks fluent Mandarin.

Matt grew up in Portland, Oregon. He received a bachelor’s degree from the University of Oregon, attended the Inter-University Program for Chinese Language Studies in Taipei, and earned a master’s degree from the Johns Hopkins University School of Advanced International Studies in Washington, D.C. He is married to Rachel Lin Matthews and has two adult children who reside in the United States.