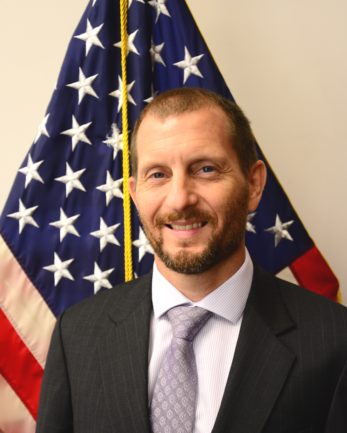 He joined the U.S. Department of State in March 2002, after working in academia and elsewhere in government. He enjoyed some wonderful years in Charlottesville, Virginia, obtaining a Master’s Degree in International Relations from the University of Virginia, and in Germany, as a participant in the Congress-Bundestag Youth Exchange Program for Young Professionals. He also earned a Bachelor’s Degree in Political Science from DePauw University in Greencastle, Indiana.

Prior to his arrival in Brunei, he served as the head of the Political-Economic Section at the U.S. Consulate General in Munich, Germany, managing the U.S. delegation to the annual Munich Security Conference and promoting U.S.-Bavarian relations. He served in Bern, Switzerland before that, working as the Embassy’s Economic/Commercial Officer, expanding Swiss investment into the United States, assisting U.S. legal authorities in clamping down on tax evasion, and strengthening the impact of U.S. sanctions on entities attempting to illicitly utilize Swiss financial structures.

He completed the State Department’s Economic Training Program in Washington, DC in 2010, following a tour co-heading the Political-Economic Section at the U.S. Consulate General in Chennai, India. He also served a tour in Vilnius, Lithuania, as the Embassy’s Economic and Commercial Officer following his first overseas posting in Manama, Bahrain, where he headed the Embassy’s Consular Section and worked as a political officer.

Scott hails from southwestern Ohio and remains a passionate “Buckeye.” He is married, has two children, and enjoys the outdoors, music, physical fitness, gardening, and reading.