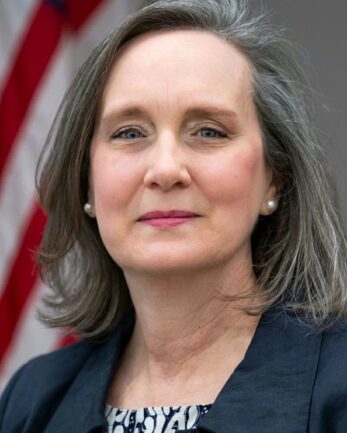 Caryn R. McClelland was confirmed by the Senate to be the next U.S. Ambassador to Brunei Darussalam on December 18, 2021.  She is a career member of the Senior Foreign Service, class of Minister-Counselor.  She previously served as the Minister Counselor for Economic Affairs at the U.S. Embassy in London, serving as Acting Deputy Chief of Mission during the UK’s G7 and COP26 presidency.

Other previous assignments include serving as the Deputy Chief of Mission at the U.S. embassies in Vietnam and Latvia, and as Consul General in Surabaya, Indonesia.  She was Acting Principal Deputy Assistant Secretary of the Bureau of Oceans and International Environmental and Scientific Affairs, and Deputy Special Representative for Commercial and Business Affairs in the Bureau of Economic and Business Affairs at the Department of State.  Ambassador McClelland led the interagency teams that created the programs for the Global Entrepreneurship Summits in Nairobi and Silicon Valley.  She was Senior Advisor for Caspian Basin Energy Diplomacy and Regional Energy Advisor in the Bureau of European and Eurasian Affairs focused on ensuring regional energy security.  She also served at the U.S. embassies in Azerbaijan, Malaysia, Turkmenistan, and Ireland.

Ambassador McClelland earned a B.A. at the University of California – Los Angeles, an M.A. at San Francisco State University, and an M.S. at the National War College.  She speaks Indonesian, Latvian, and Russian.