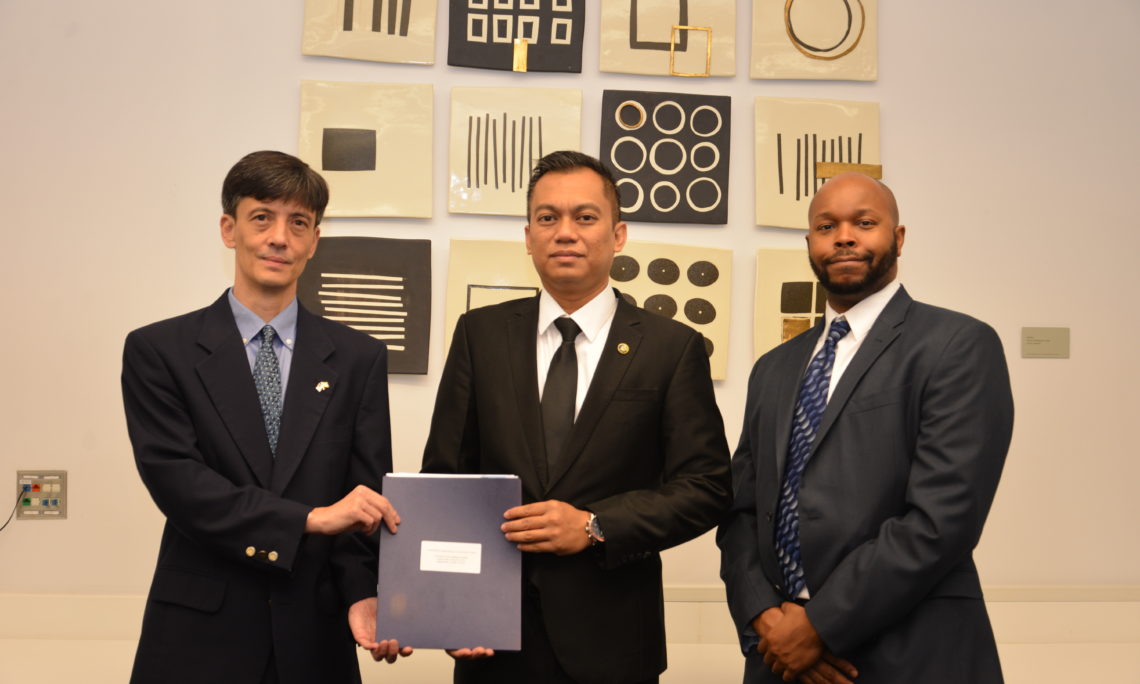 This program will survey the transnational threat landscape and the role that global cooperation and partnerships serve in addressing them. The participants will gain a deeper understanding of the pluralistic nature of the United States through exposure to key security issues, including cybersecurity, disinformation, terrorism, countering violent extremism, transnational organized crime, energy, non-proliferation, and regional threats.

The program will take place in four locations in the United States: Washington D.C., New York, Colorado, and Florida.

Mr. Haji Mohammad Termizi recently met with Regional Security Officer, Nadim Abdush-Shahid, who congratulated him on his selection for the program, stating, “this program will give Mr. Hj Mohammad Termizi the opportunity to engage with experts on approaches to formulating and implementing policies that maximize coordination among agencies, promote information sharing, and enhance cooperation with foreign counterparts.”

Looking forward to his participation in this elite program, Mr. Hj Mohammad Termizi said, “I would like to convey my profound gratitude to the Government of The United States of America and the Government of His Majesty the Sultan Dan Yang Di Pertuan Negara Brunei Darussalam for giving me the honor and the opportunity to take part in this year’s edition of the International Visitor Leadership Program. I hope to gain a deeper understanding of the workings of the U.S. political system, specifically in its approach towards combating transnational crimes and towards enhancing inter-government cooperation and collaboration with foreign counterparts.”

“The knowledge gained will be invaluable towards strengthening the relationship between the two countries and will pave the way for better cooperation with the greater global community towards a more secure world,” Mr. Hj Mohammad Termizi continued.

The IVLP provides an opportunity to strengthen relationships between international participants and their American counterparts. It is one of the U.S. Department of State’s most important exchange programs, connecting current and emerging foreign leaders with the American people through short-term programs to build mutual understanding on a wide range of issues. Nearly 200,000 distinguished individuals have participated in the program, including more than 335 current or former Chiefs of State or Heads of Government, and thousands of leaders from the public and private sectors.