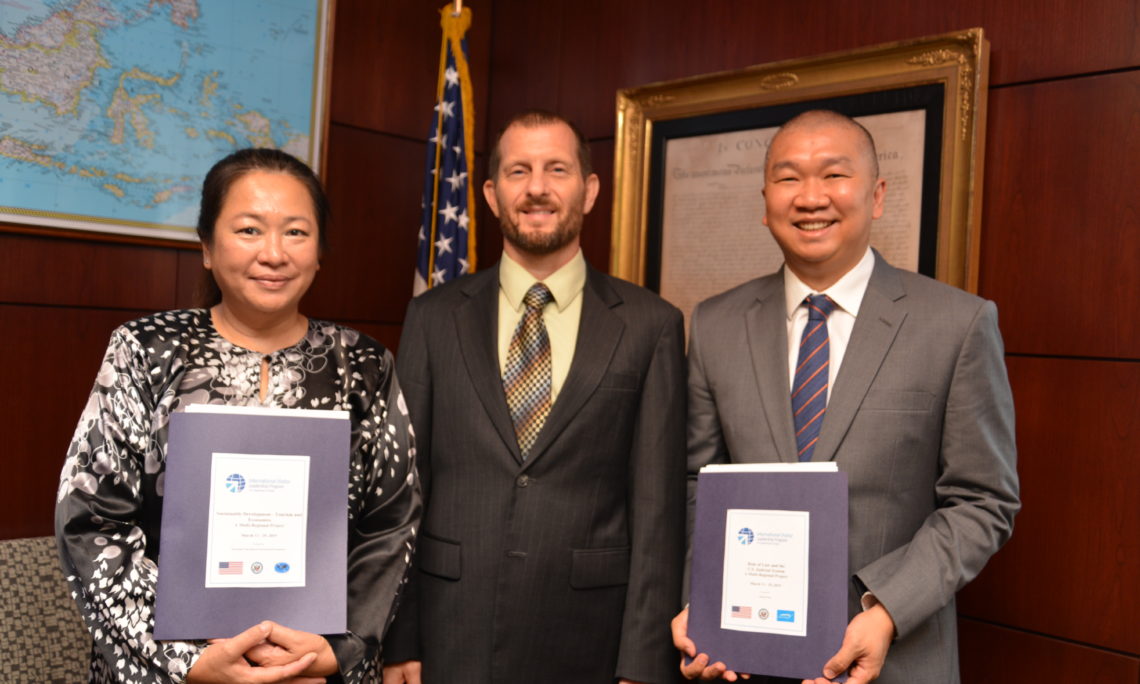 The Embassy of the United States of America in Brunei Darussalam is pleased to announce the latest participants for the 2019 International Visitor Leadership Program (IVLP), the U.S. Department of State’s premier professional exchange program.

Mr. Christopher Ng, in the ‘Rule of Law and the U.S. Judicial System’ program, is examining the U.S. commitment to the promotion of transparency, ethics, and judicial independence. The meetings and site visits highlight the judiciary’s role in preserving practices such as due process, trial by jury, the right to representation and a fair trial, the role of the public defender, the appeals process, judicial appointments/ elections, and governmental accountability.

Ms. Dk. Kemariah, in the ‘Sustainable Development – Tourism & Economics’ program, is exploring how tourism for pleasure, recreation, and education generates sustained economic growth and creates local jobs. Participants are also examining strategies and incentives used to promote sustainable tourism, paying particular attention to infrastructure and economic considerations. They are seeing examples of sustainable tourism that is socially and environmentally responsible and ventures that emphasize cultural, family, adventure, and eco-tourism.

Mr. Christopher and Ms. Dk. Kemariah met recently with U.S. Embassy Bandar Seri Begawan Chargé d’Affaires, Scott Woodard, who congratulated them on their selection for the program.  Chargé d’Affaires Woodard stated, “While these two International Visitor Leadership Programs are very different in theme and content, both are equally important when it comes to cultivating professional knowledge and strengthening relations between the United States and Brunei Darussalam. We are honored to be giving these two exceptional Bruneians the opportunity to further develop their craft and meet with other experts in their respective fields.”

Mr. Christopher stated, “I am honored to have been selected for the International Visitor Leadership Program as this will be an invaluable and unique opportunity to be able to augment the legal skills and knowledge I have presently with new perspectives. I would also like to express my sincere gratitude to the U.S Embassy in Brunei Darussalam as well as my Office, the Attorney General’s Chambers for all the efforts and support that have made my participation possible.”

Dk. Kemariah stated, “I am honored and proud to be selected and invited to participate in this IVLP on Sustainable Development: Tourism &amp; Economics. I am excited to learn and understand the strategies to promote sustainable and viable tourism, while fostering a closer relationship between the United States and Brunei Darussalam.”

The IVLP provides an opportunity to strengthen relationships between international participants and their American counterparts.  The IVLP is one of the U.S. Department of State’s most important exchange programs, connecting current and emerging foreign leaders with the American people through short-term programs to build mutual understanding on a wide range of issues. Nearly 200,000 distinguished individuals have participated in the program, including more than 335 current or former Chiefs of State or Heads of Government, and thousands of leaders from the public and private sectors.