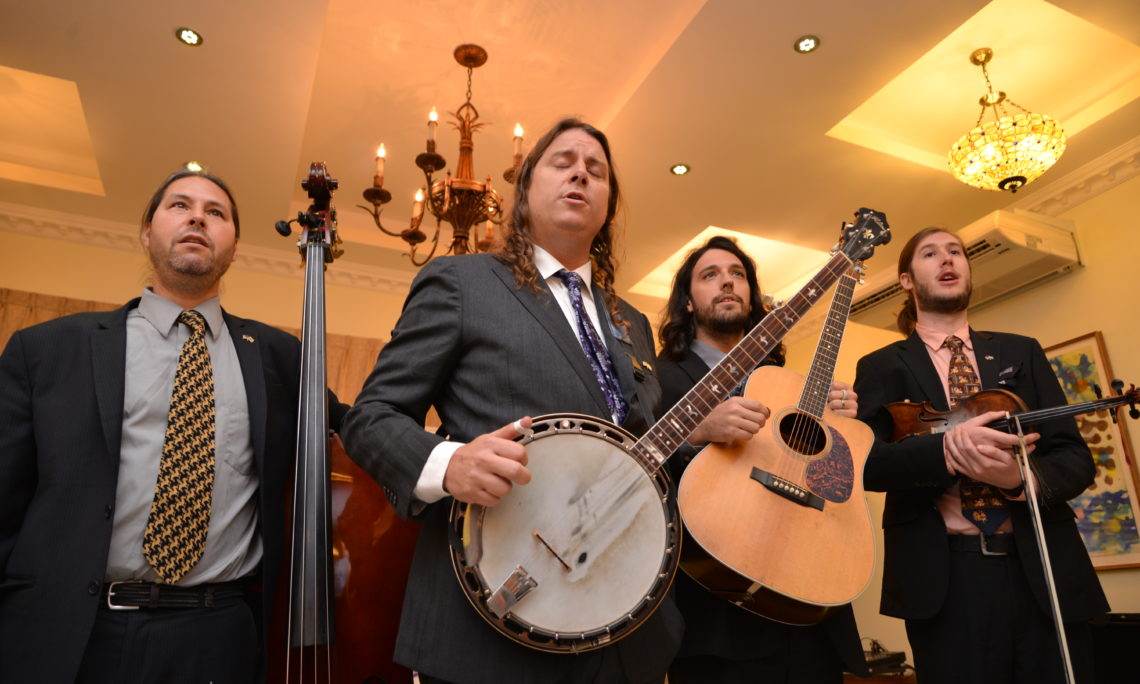 From November 18 to 20, 2019, U.S. Embassy Bandar Seri Begawan hosted American bluegrass band the Henhouse Prowlers as Arts Envoys to Brunei. The Henhouse Prowlers are a quartet from Chicago that has performed on behalf of the U.S. Department of State since 2013 as “bluegrass ambassadors” to share the universal language and common love of music. They have visited over 25 countries to conduct music education workshops and perform for local audiences.

Bluegrass is a distinct type of American folk music, similar to country but often faster, with no drums and generally featuring the metallic tones of a banjo. It originated in the United States through a combination of musical styles from European folk and African traditions. The Henhouse Prowlers play the classic bluegrass instruments: fiddle, guitar, banjo, bass, and mandolin.

During their visit to Brunei, the Henhouse Prowlers conducted musical workshops and bluegrass demonstrations, including a workshop with musicians from Brunei where they discussed the history of bluegrass, their career paths as professional musicians, and the creative song-writing process. Local artists included members from the Brunei Music Society, traditional instrumentalists Irama Bahtera, Radio Televisyen Brunei (RTB) Orchestra, and local bands Hurricane Honey, Senjakala, Hundred Beats, and Tropical Hornbills. The Bruneian and American musicians combined to perform traditional songs from both nations such as “Joget Seri Kenangan, “Joget Baju Putih,” “Zapin,” and “Amazing Grace”.

A highlight of their visit was a special event hosted by U.S. Ambassador to Brunei Darussalam, Matthew J. Matthews. Ambassador Matthews welcomed the Henhouse Prowlers to a performance at his home, stating “Bluegrass is a uniquely American musical tradition that links our history and the arts, which is why we are thrilled to bring this band to Brunei as part of the Arts Envoy program.” The performance ended with a special collaboration between Ambassador Matthews, U.S. embassy staff members and the Henhouse Prowlers.

The Arts Envoy program shares the best of the U.S. arts community with the world to foster cross-cultural understanding and collaboration and to demonstrate shared values and aspirations. American arts professionals, including performing artists, visual artists, poets, playwrights, theatrical and film directors, curators, and others, travel overseas to conduct workshops, give performances, and mentor young people. These programs seek to connect with international publics who might not otherwise have the opportunity to engage with American arts professionals.