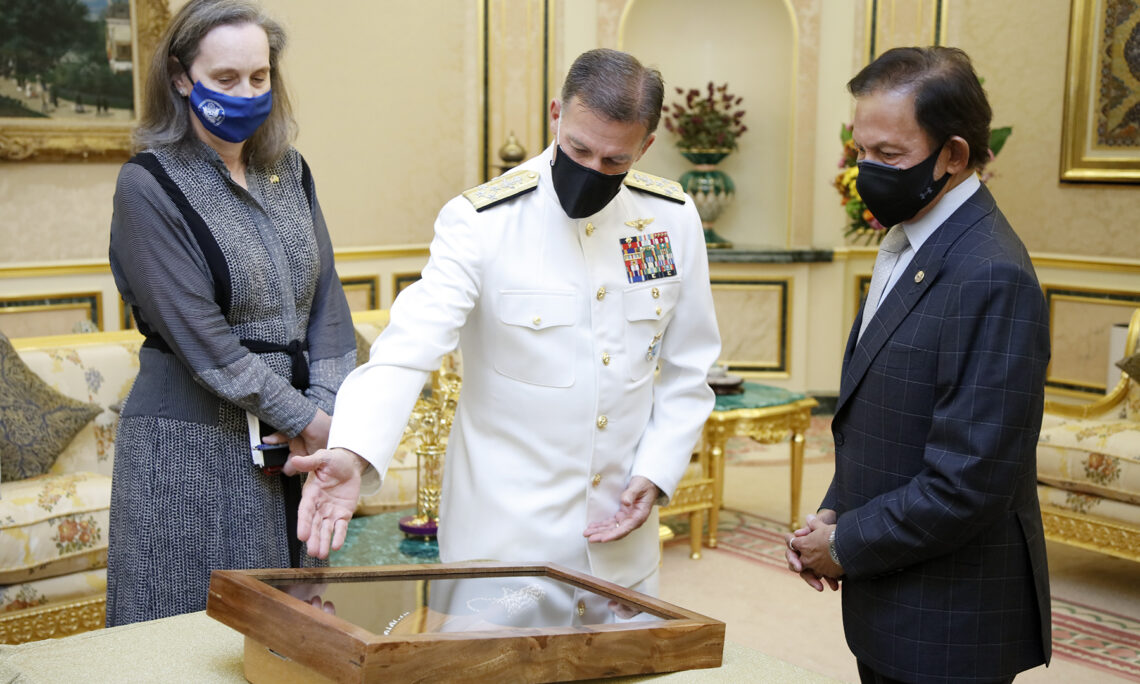 Admiral Aquilino, accompanied by Ambassador McClelland, presents a token of appreciation to His Majesty the Sultan of Brunei Darussalam during the royal audience. Photo courtesy: Infofoto

Admiral John C. Aquilino, Commander of the U.S. Indo-Pacific Command, concluded his three-day visit to Brunei Darussalam on August 9. The visit was focused on enhancing security cooperation between the United States and Brunei for the mutual benefit of both countries and in defense of a free and open Indo-Pacific region.

On August 8, Admiral Aquilino met with His Majesty the Sultan. He expressed his gratitude to His Majesty for his unwavering support of the security partnership and continued defense cooperation between Brunei and the United States. He was joined by U.S. Ambassador to Brunei Caryn R. McClelland, his Executive Assistant Captain Melvin Smith, and the U.S. Embassy’s Chief of the Office of Defense Cooperation Lieutenant Commander Samuel Kim.

Through meetings with the Ministry of Defense, the Prime Minister’s Office, and the Ministry of Foreign Affairs, Admiral Aquilino discussed ways to strengthen Brunei’s security cooperation with the United States and regional partners to address global challenges such as violent extremism and climate change. He also focused on enhancing training collaborations and intelligence sharing to respond to and prevent emerging threats. His trip included a visit to the Sultan Omar Ali Saifuddin Mosque, where he had an opportunity to learn about the rich history of Islam in Brunei and gain an appreciation of the cultural and architectural elements that make the mosque unique.

“We were delighted to have Admiral Aquilino in Brunei Darussalam for his first official visit as the U.S. Indo-Pacific Commander,” said Ambassador McClelland. “His visit speaks volumes about the United States’ commitment to our security partnership with Brunei. We plan to build off this to continue increasing the joint interoperability of our forces and improving regional security awareness and cooperation.” The close relationship between the United States and Brunei Darussalam began when the USS Constitution dropped anchor in Brunei Bay on April 6, 1845 – a visit that led to the signing of a Treaty of Peace, Friendship, Commerce and Navigation that remains active today.

The United States and Brunei’s armed forces regularly engage in joint exercises and training programs, with the annual Cooperation Afloat Readiness and Training (CARAT) exercise at the core of the bilateral defense relationship. The Pahlawan Warrior exercise between the U.S. Army and Royal Brunei Land Forces that took place in June this year was the largest combined exercise the two nations have ever conducted. More recently, the Arleigh Burke-class guided-missile destroyer USS Higgins (DDG 76) made a port call on July 25 to Brunei in honor of His Majesty the Sultan of Brunei’s 76th birthday.

The U.S. Indo-Pacific Command is the United States’ oldest and largest combatant command, and Admiral Aquilino is the region’s most senior U.S. military commander, reporting directly to the U.S. Secretary of Defense.