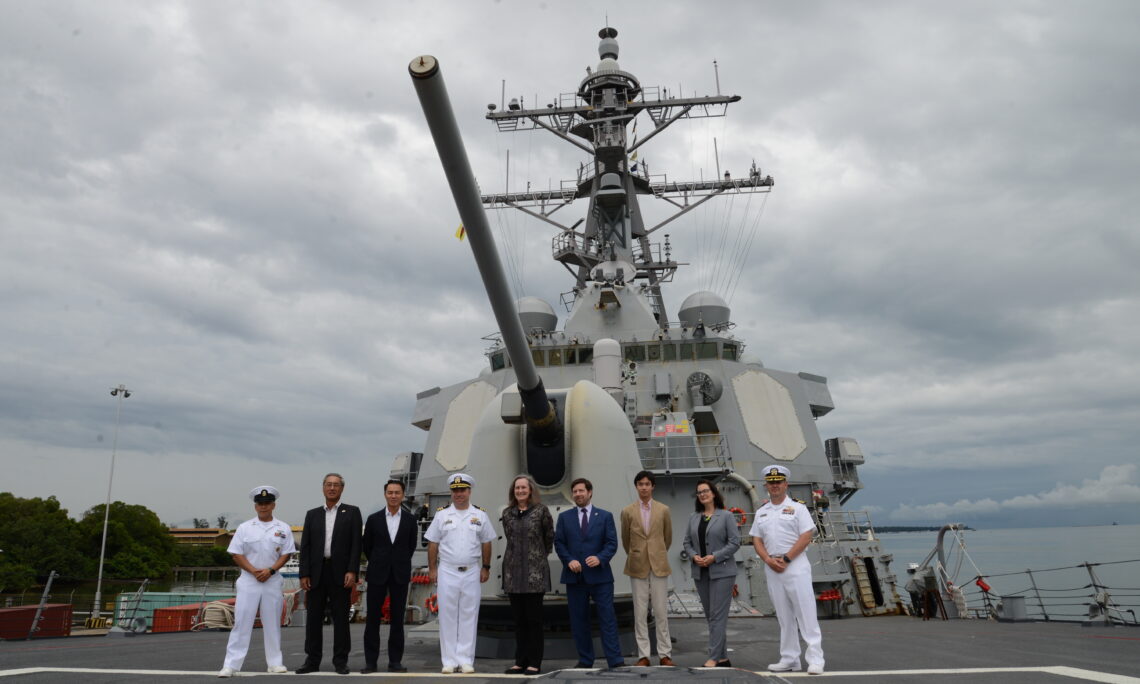 The Arleigh Burke-class guided-missile destroyer USS Higgins (DDG 76) welcomed the U.S. Ambassador and other foreign dignitaries to Brunei onboard today. The U.S. Navy ship is berthed at the Muara Port from July 22 – 26, as she makes a port call to Brunei in honor of His Majesty the Sultan of Brunei’s 76th birthday.

While onboard, U.S. Ambassador Her Excellency Caryn McClelland and Deputy Chief of Mission Emily Fleckner were welcomed by Commander Joseph McGettigan, the USS Higgins’ Commanding Officer. They were joined by the High Commissioner of the United Kingdom His Excellency Mr. John Virgoe, High Commissioner of Singapore His Excellency Mr. Heng Aik Yeow, and the Counselor / Deputy Chief of Mission of Japan Mr. Suda Atsushi.

Brunei is the USS Higgin’s first foreign port call after the COVID-19 pandemic. This routine port call highlights the United States and Brunei’s continued cooperation with Brunei and our strong support for the region, including institutions such as ASEAN, as a cornerstone of our Indo-Pacific Strategy.

In Brunei, the ship had given tours to invited guests on Saturday and Monday. Additionally, tours were offered that brought sailors to see the rainforests, explore the water village, and tour some of the mosques in Brunei.

“The United States and Brunei’s relationship has entered its fourth decade in a position of strength and we continue to build our partnership through joint military exercises and engagements such as the Southeast Asia Cooperation and Training (SEACAT) in August 2021 and the 27th annual Cooperation Afloat Readiness and Training (CARAT) in November,” said Her Excellency Ambassador McClelland. “We are proud of our exemplary cooperation based on mutual desire for the peace, security, and prosperity of the Indo-Pacific region.”

The USS Higgins is assigned to Task Force 71/Destroyer Squadron (DESRON) 15, the Navy’s largest forward-deployed DESRON and the U.S. 7th fleet’s principal surface force. The visit also served as an opportunity to demonstrate the type of capabilities that the USS Higgins can provide while deployed to the U.S. Seventh Fleet area of responsibility.

The United States and Brunei have enjoyed a long-lasting and prosperous friendship since we signed the Treaty of Peace, Friendship, Commerce and Navigation over 170 years ago. Our armed forces engage in joint exercises, training programs, and other military cooperation, with the annual Cooperation Afloat Readiness and Training (CARAT) exercise at the core of the bilateral defense relationship. The U.S. Army and Royal Brunei Land Force also recently engaged in the Pahlawan Warrior jungle training exercise in June.