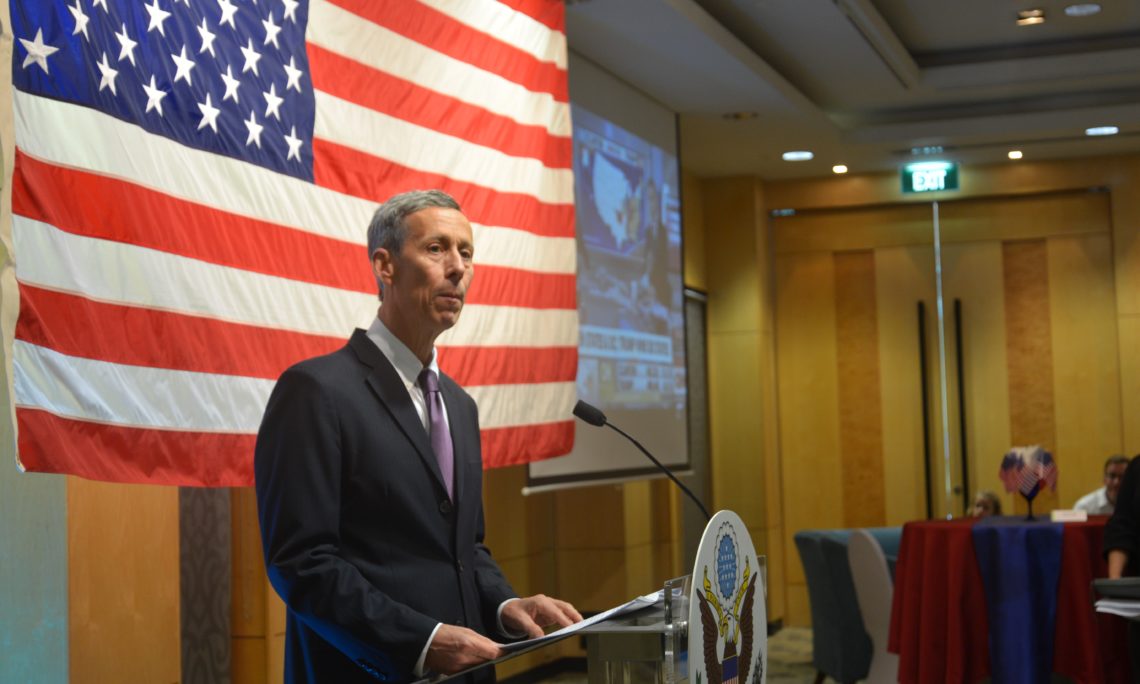 Season’s Greetings from the U.S. Embassy!

As 2016 draws to a close, we would like to take a moment to reflect on U.S.-Brunei relations over the past year.  We thank the His Majesty the Sultan, the Government of Brunei Darussalam and all Bruneians for friendship, warm hospitality and commitment to advancing peace and cooperation.

This highlight of 2016 was His Majesty the Sultan’s travel to the United States to participate in the U.S.-ASEAN Special Leaders’ Summit in Sunnylands, California.  The Summit marked a watershed year for both ASEAN and for the increasingly close U.S-ASEAN strategic partnership.

Throughout the year, I have emphasized the 170 years of friendly relations between the United States and Brunei Darussalam, dating back to the arrival of an American naval ship, the USS Constitution, to Brunei Bay in 1845.  Our relations were formalized five years later with the signing of the Treaty of Peace, Friendship, Commerce and Navigation, which remains in effect today.  In fact, the treaty’s emphasis on peace, friendship, commerce, and navigation continue to be main themes in our relations.

This past year, the Minister of Energy and Industry Pehin Yasmin traveled to the United Nations twice to sign and ratify the Paris Agreement, standing with Secretary of State John Kerry, Ban Ki-Moon, and leaders of well over 100 nations to combat climate change—one of the central challenges of our time.

We welcomed many American visitors to Brunei, including a repeat visit by the Secretary of State’s Special Envoy to Muslim Communities, Shaarik Zafar, who further discussed ways in which our two countries can better cooperate, and Commander, U.S. Pacific Fleet Admiral Scott H. Swift who met with His Majesty the Sultan to highlight our strong military and diplomatic partnership.

2016 was another banner year in U.S.-Brunei defense cooperation.  The United States and Brunei worked together in the Cooperation Afloat Readiness and Training (CARAT) exercise, which enhances regional cooperation and strengthens professional skills between our two forces.  This exercise included three ships and over 550 Sailors, Marines, and civilians.  I also had the honor of holding a commemoration ceremony and unveiled a memorial in the U.S. Embassy honoring the American sailors who made the ultimate sacrifice when the USS Salute, an auxiliary minesweeper, struck a mine and sank during pre-invasion sweeps in support of the allied liberation of Borneo in June 1945.

This was also a great year for educational and cultural exchanges.  Through our many notable U.S. Government (USG) exchange programs, whether for professionals or students, such as the International Visitor Leadership Program, Fulbright Foreign Student Program, and Southeast Asia Youth Leadership Program, we were able to welcome Bruneians in the United States to experience America first hand, thereby enhancing their skills and understanding.

The Young Southeast Asian Leaders Initiative, also known as “YSEALI” is a crowd favorite among the youth, and we are excited that there are over 1,000 members in Brunei Darussalam who continue to do many great things showcasing exemplary leadership and working with peers across the region on solutions to national and regional challenges.

Earlier this year, we hosted the U.S. Higher Education Fair in which we introduced American educational institutions to students, parents, and educators.  With the participation of our U. S. exchange alumni and local NGOs, our annual “Let’s Go America” event introduced information on education, business, and tourism in the U.S., American food, and musical demonstrations.

The Embassy’s involvement with the local community continues to gain momentum as we partner with individuals and NGO/CSO’s on projects addressing various themes, from environment, civic education, culture, and arts to civil society development, reflecting our mutually shared values.

As we prepare for the American political transition to take place, we wish to assure our friends in Brunei that our tradition of friendly cooperation will continue unabated.   We look forward to robust engagement with Brunei in 2017 and beyond.

There is much to be thankful for and even more to look forward to in the further development of our bilateral relations.  We wish everyone happy holidays and a very happy new year!  May 2017 bring even greater engagement, a strengthened friendship, and prosperity for our two great nations.